"Running your first marathon after riding 112 miles and swimming 2.4 miles -- all in 95+ degree heat -- is doable. Trust your plan, and keep going, even if things go wrong."

Three months ago, I emailed you asking you what your goals were. I got some awesome responses.

"I've been running for 25 years, and I want to qualify for Boston this year."

"I want to run my first half marathon on Thanksgiving this November."

"I want to finish my first Ironman in Arizona this November."

You may recall that my goal was to finish Ironman Boulder while pushing hard and feeling good.

When I wrote that, I had decided that I was going to go 0-140.6 -- in four months. I signed up for a full Ironman that was to take place four months from when I emailed you guys. Today, I can report to you that my goal was achieved. It wasn't pretty, and there were definitely ups and downs along the way. That just comes with the territory.

The Journey To Race Day

Back in February, I put a target on the calendar. Ironman Boulder -- June 10, 2018. The Stryd office is an active bunch, and I figured it would be good to practice what we preach. In order to empower athletes, I needed to understand what it takes to finish an Ironman strong. I had dabbled in sprint triathlons over a decade earlier. I grew up watching my mom compete in triathlons, including the Ironman World Championships in Kona in 2001 and 2006. I always wondered, "how hard could this really be?" People close to me, who tried to talk me out of racing a full Ironman off of four months of training, at least advised me to do a 70.3 before jumping into the full. I signed up for a half Ironman in St. George, UT in May, where Matt (Stryd's head of coaching) and I had the fastest run splits out of all the non-professional athletes.

After recovering from St. George, I had time for two five hour rides and one two hour run before it was time to dial it back for race day on June 10th. This wasn't ideal preparation, but it was all I could do with five weeks in between races. I used the data from these runs and rides to build race day power targets for both disciplines.

For those of you that have done one, you know. Racing an Ironman is a unique experience. It's certainly different than your local triathlon or 5k. There is a lot of hype involved, and for the most part, it lives up to the hype. I'm not one to buy into the slogans of different corporate entities, except "Run With Power" of course, but after running Ironman Boulder, I have a new appreciation for the Ironman's phrase "Anything Is Possible."

The swim went fine. My open water swimming experience in the last 10 years is limited to the 70.3 in May and jumping into every alpine lake above 8000 feet I can find across the Rocky Mountains. Still, my goal was to swim 1:00 for the 2.4 miles, and sure enough I came out and the clock read 1:00:27. 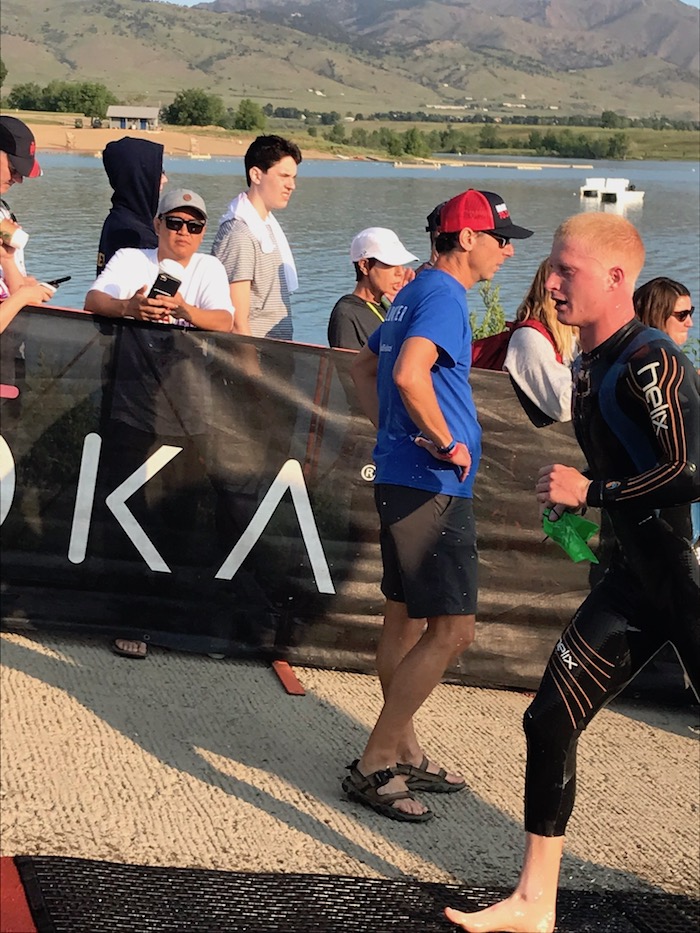 "An Ironman is such a long race. It can look like it's going to be a long, terrible day, but there's time to turn it around" -- Rebecca Obletz

The bike leg is by far my weakest leg. It makes sense; it takes time to become a proficient cyclist -- from getting comfortable in the aero-position traveling at high speeds to being in the seated position for over five hours. I had a bike power target for the day, which was based on an thirty minute all out effort I did two weeks after St. George, as well as the wattage numbers I was able to hold for the two five hour rides I did before race day.

I felt like dynamite coming out of T1. I was ready to pedal away the 112 miles. Nine miles into the ride, I had my first learning experience of the day. I had been consistently passing people, and staying below my target power. I was passing a 50 year-old stud of an athlete when he veered to the right and hit a traffic cone. Swerving all over the road, he clearly looked distraught. I braked and asked him if he was okay, and one minute later, a race referee came up on his motorcycle and informed me I was being penalized five minutes for drafting. This was not the start I was looking for. 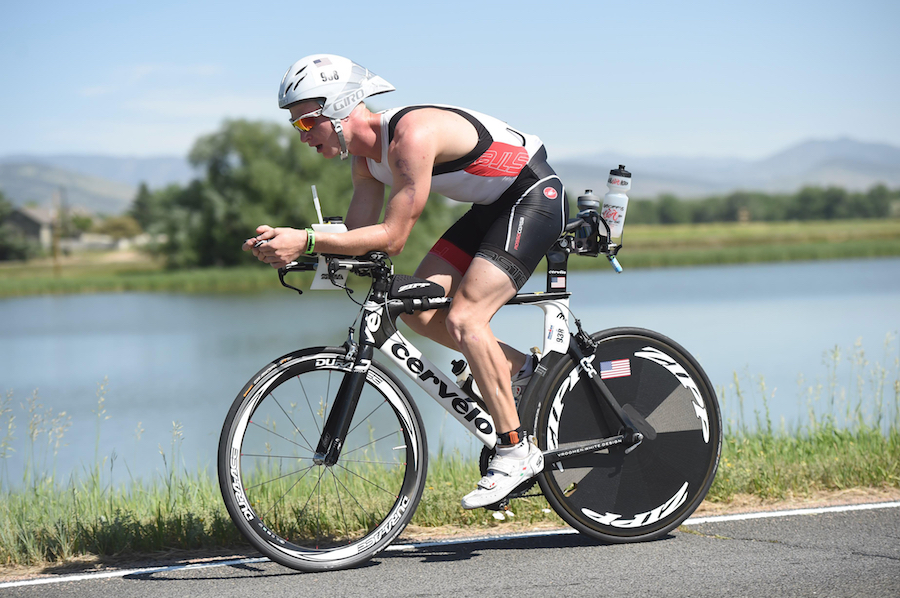 After serving the penalty, I got back in my rhythm, and finished the first loop of the two lap course right where I wanted to be -- two watts under my overall power target. At this point, the air temperature was over 85 degrees, and nutrition was becoming even more important. I was heeding the advice of others -- drink every 15 minutes, and try to shoot for 250-300 in calories every hour. Still, I was beginning to feel what I now know as "bonking." Lightheadedness. Fatigue. Feeling like I have the stomach flu. My mom walked 25 of the 26 miles of one of her Kona finishes because her body couldn't process fluids. That was the run. I wasn't even 2/3 through the bike yet. I hoped that my day wasn't going to end up like that.

My average bike power kept going down and down. Then, to make matters worse, my rear tire blew while I was descending 40+ MPH down the last major descent of the course on Hygiene Road. While I was able to change the tire in under 10 minutes, I was quickly getting drained mentally and physically.

The only thing keeping me in it was my mother's words and the anticipation of getting off of two wheels and on to my two feet. After all, we were born to run; enough of this cycling business. It was time to get to work. 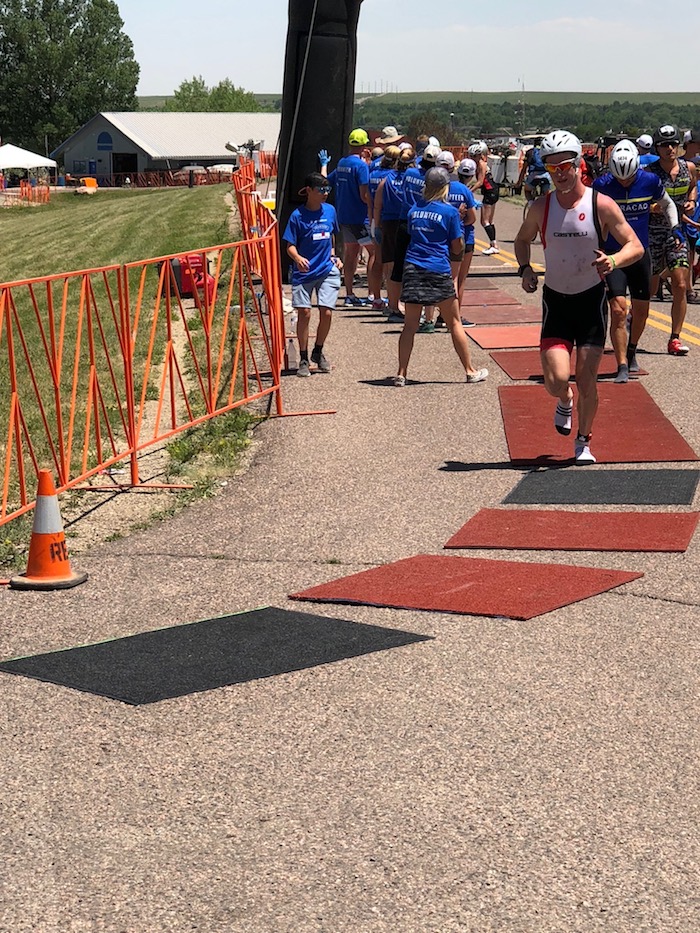 Many members of the Stryd Community have done Ironmans, including the World Championships in Kona. Almost all of them will say, if you go out too fast in the first 10k after 112 miles of biking, it will be a long afternoon for you. "At mile 22, If you are still running, while others are walking. you can make up 15-30 minutes on 'em in two miles. -- Coach Eric Kenney, a Stryd Power Coach, told me. This wisdom is completely true in any Ironman (or endurance race for that matter) and was definitely true given the heat of yesterday's race.

In training, I had always been able to run 340-350 watts coming off the bike. Whether the ride was 40 miles or 90 miles, I was always eager to get off two wheels and back on my two feet. It always felt really good to be running again.

I couldn't have felt more different coming off of the 112 mile ride on race day. Sluggish would be an understatement. Running 26.2 miles seemed, for the first time, a herculean task. I immediately understood what Eric Kenney and others said. If I were to push it coming out of T2, I would 100% be walking the last 10k. Maybe even the last 20k. Luckily, I was able to follow my power on the first three miles of rolling hills and dial back my effort considerably, as you can see in my power file. For the first six miles, I walked through each aid station. I knew what I was capable of and trusted that by going out at a reasonable effort, focusing on fueling up each aid station, I would be able to demonstrate my fitness later in the race. 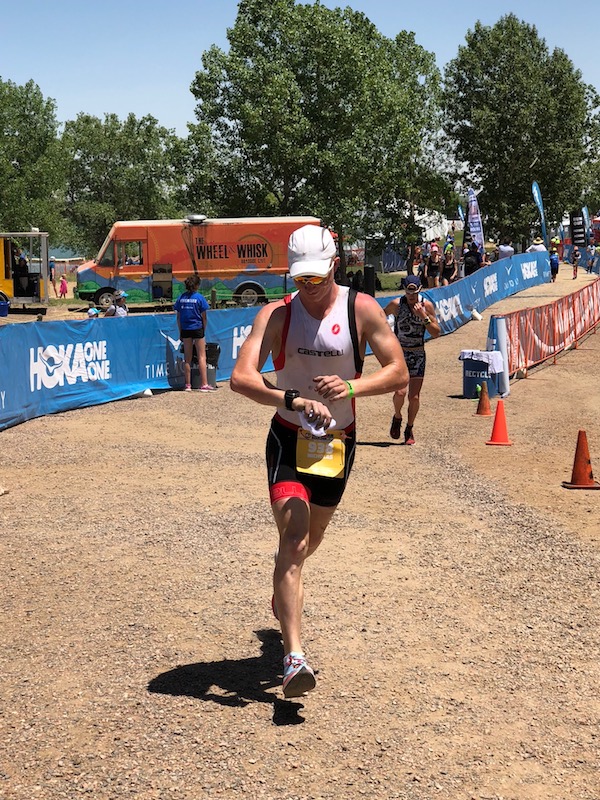 Sure enough, eight miles into the race, I started to find a rhythm. I began increasing my wattage to my target range (290-300); I was careful not to overdue it because I wanted to finish strong. My longest run before race day was 16 miles. I felt, at that point, I could run another 16 miles at the same or better effort -- as long as I stuck to my power.

The last mile was textbook -- exactly what Stryd sets you up for. I hadn't written a check I couldn't cash. I was ready to go. I finished the marathon with a 6:45 last mile, right at the hottest point of the day. 95 degrees. As I approached the line, I got tunnel vision and barely heard Mike Reilly's infamous "You Are An Ironman." I guess that's what happens when you sprint the last quarter mile of a 140.6 mile race.

As I said before, my longest run before race day was 16 miles (two hours). I had never run a marathon. By following my power target and not going out too fast, I was able to have the fifth fastest run split (3:23:54) out of 1000+ (non professional) athletes with a 6:45 last mile. 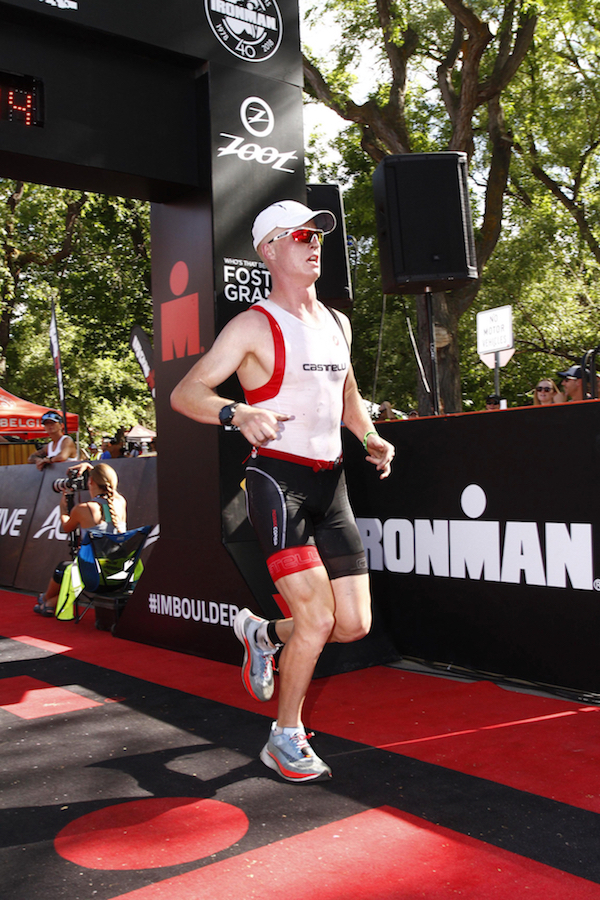 When my tunnel vision opened, I looked over at my family, friends, and colleagues at Stryd and was immensely thankful for their support. As I write this, I am re-reading of the letters, emails, and messages of support I received from members of the Stryd Community, wishing me luck and providing encouragement these past few months. 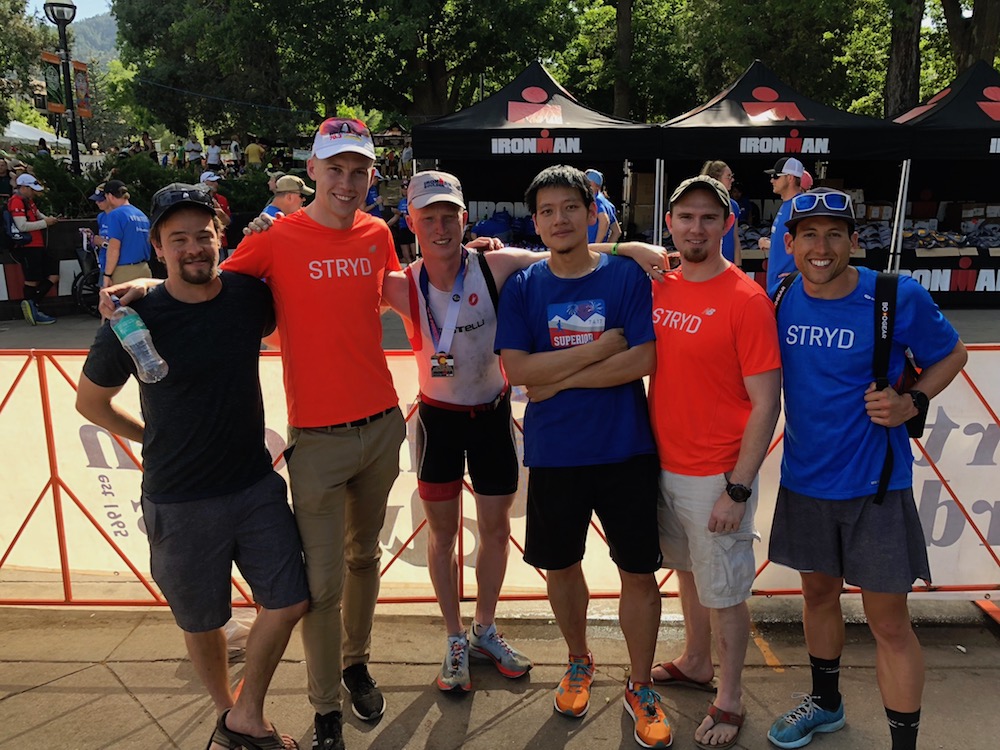 With the right plan, it can be done. Even if a couple of curveballs are thrown at you. So, my work for now is done. Now, it's your turn.

While I contemplate my next goals, update me on what you have done these past few months. Whether you hit your PR, had an awesome workout, hit your Boston Qualifier, or signed up for an ultramarathon this September, let me know. Remember, June is Watts That Won month, so I am excited to hear about your recent triumphs as well as your upcoming endeavors. 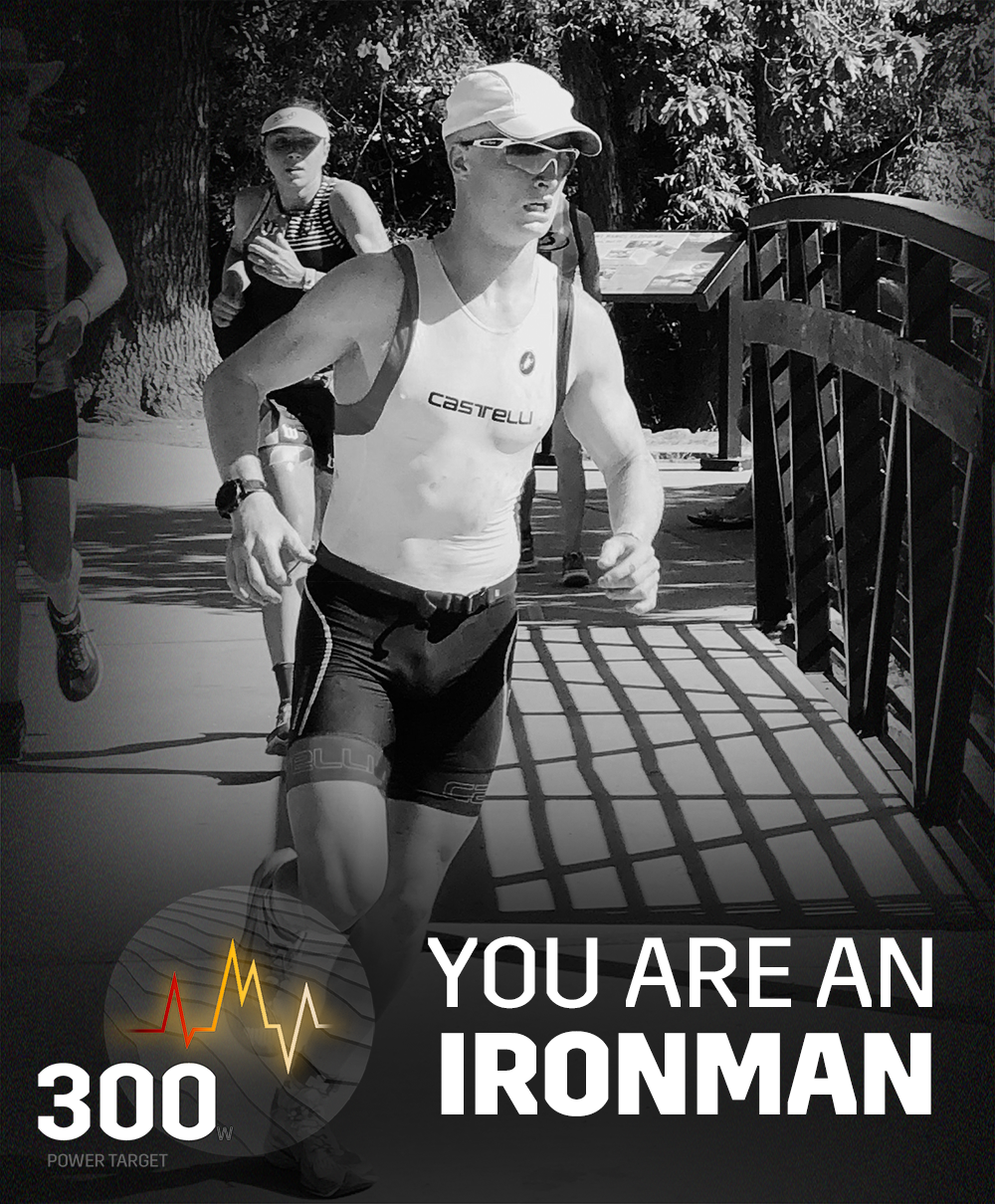