Recently, London-based runner Chris Turner shared with us his experience using the Stryd power meter to prepare for the 2016 London marathon. He raced a PR on the day.

Chris is a self-coached runner and made the transition from using heart rate zones for training to power zones in his preparation for the marathon. 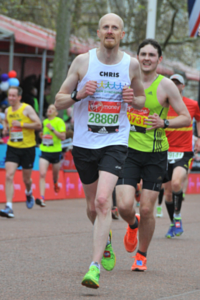 From being familiar with his power output, Chris commented he was able to pace himself better, hold back the race adrenaline and not go out too fast. This allowed him to hold his pace until the end of the race.

Using Stryd data in his training gave him a new level of confidence on race day. He knew he could sustain the power. That alone is a win!

Meet Chris
Chris is a self-coached athlete from the UK who took up running seriously four year ago. He has raced two marathons, eight half marathons, and also does track, triathlon and biking as well as the occasional cross country race.

Before introducing power zones to his training regimen, the biggest improvement Chris has seen in his performance came from increasing his average cadence to 185-90/minute.

From Heart Rate Zones to Power Zones
Even as a recreational runner, Chris always used data to train with and is a self-confessed goal-oriented person. From early on he committed to tracking his vital running stats using Strava, a heart rate monitor and cadence.

Chris was already familiar with power-based training zones from biking and saw it as a natural progression to apply it to running.

Chris emphasized the importance of ‘just running’ with the power meter in the first instance to get some raw data into the Power Center. Chris used the side-by-side data to see the correlation between heart rate and his power numbers.

Right away, he saw an obvious correlation between power and perceived effort. His threshold and interval zones lined up well with his corresponding heart rate zones. Through trial and error he adjusted his lower level zones based on his own physiology. He is already aware that his recovery run pace is slightly higher than most.

From Test Runs to Training Only with Power
After setting his power zones and training simultaneously with heart rate and power for a few weeks, Chris went cold turkey and switched off all other training data except power.

Over the eighteen weeks of marathon training, Chris began to notice distinct benefits. It became easier to accommodate hills in training, keeping the power under control on the uphill and pushing on the downhill. He noticed each training zone also became easier over time.

Interpreting the Data
Chris used the Stryd Power Center and synced the data with Training Peaks with his other metrics: heart rate, vertical oscillation, pace, and cadence.

As the data set grew he was able to identify where he was ‘off’, why that might be, and how to improve. This was particularly relevant on hills.

He also observed a link between vertical oscillation and pace. He is still deciding what that might mean!

Race Recap
We’ll hand over to Chris give you his account of race day. The joy Chris shares in reaching his goal is inspiring and gives food for thought on how you can use power for your next PR attempt.

London Marathon Race Recap by Chris Turner
The Stryd has been invaluable to me during training, especially in ensuring that my easy runs were easy enough and my harder runs were at the correct intensity. 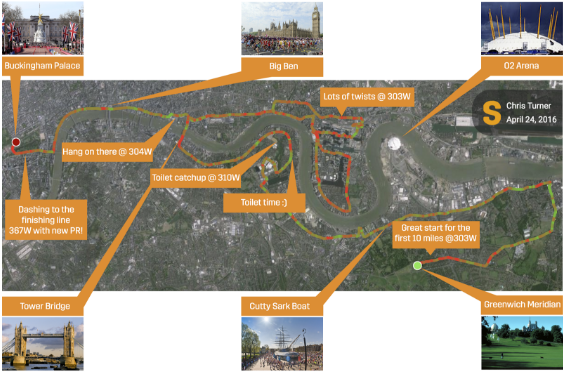 Although pacing using power fell away towards the end of the race, I think those first 10 miles using the Stryd to control effort really made it possible for me to keep the pace going right to the end. 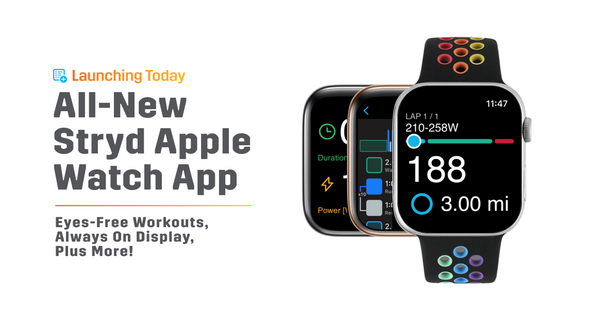