Introductory Guide to Running with Power 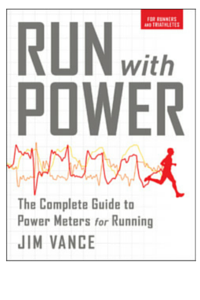 Velo Press, based in Boulder, Co. has just released the first comprehensive guide to the concept of using power meters for running in collaboration with coach/author Jim Vance.

'Run with Power' is a introduction to the power-based training, a concept long familiar with cyclists and now - as we know at Stryd - ready to revolutionize the way runners train.

Tri coach and author Jim Vance outlines how to interpret the data gathered from your Stryd running power meter in order to be able to establish personal power training zones.

Importantly, Vance also shares how to compare wattage, heart rate, pace and perceived exertion to get maximum insight into your training so you can train smarter and more efficiently with your training load and time.

On a practical level, the book also features a series of training plans with the goal of helping those new power-based training.

Jim Vance is a TrainingBible coach and former professional triathlete. He recorded two world championship titles as an amateur in XTERRA and International Triathlon Union.

Jim currently resides in San Diego with his wife and two young sons.

Concepts Covered in 'Run with Power'

Knowledge is power, and understanding your power numbers is your next step!